“Do you realise how few ever really understand how fortunate they are in their circumstances?”
Such simple words, yet such a profound effect! There are very few people who can do as much justice to words as R. K. Narayan. Born on October 10, 1906 in Chennai, Rasipuram Krishnaswami Iyer Narayanswami was the eldest boy among six brothers and two sisters. Narayan spent a huge part of his early days with his maternal grandmother, Parvati who taught him arithmetic, Sanskrit, mythology, and Indian classical music. Kunjappa, as his grandmother fondly called him, had two best friends during this period; a peacock, and a mischievous monkey.
Narayan developed a taste for English literature since his early days. His whole family used to converse in English, and being a voracious reader only made him grow fonder. Narayan studied in many schools while living with his grandmother, some of which included the Lutheran Mission School in Purasawalkam, C.R.C. High School, and Christian College High School. When his father was transferred to Mysore, Narayan started reading even more passionately. The library at the Maharajah’s College High School fuelled his passion for books. It was then that he began writing. And it was then that he fell in love. His first novel, Swami and Friends, was rejected by multiple publishers before finally being published in 1935, the year after he got married to the love of his life, Rajam.
After a short period of working, without success, as a teacher, an editorial assistant, and a newspaperman, Narayan gave up, and started devoting all his time towards writing. He first caught public attention with his second novel, Bachelor in Arts (1939), when novelist Graham Greene called him “the novelist I most admire in the English language”. His subsequent books saw more success all around the globe. One of his finest works is The English Teacher (1945), which was partly autobiographical and dealt with the struggles of a teacher, along with the pain that came with the death of his wife. 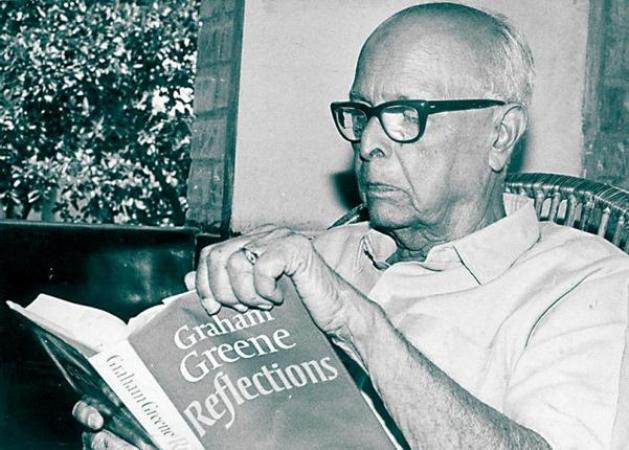 Narayan was a dedicated writer. He usually wrote for about a couple of hours a day, composing upto 2000 words within that time frame. He rarely rewrote or corrected what he wrote. Narayan’s style of writing has been tasteful, dramatic, and captured the reader right from the beginning. With a slow, simple start, the characters would be introduced, and then, by chance, or misfortune, or carelessness, tragedy would befall the protagonist. Mundane events would transform into preposterous disasters. Humour would find its way into the stories in the most unexpected ways. And the most beautiful thing that was imbibed in every story was the humility with which every hero would accept his fate, and the gradually, everything would turn out to be well, and thus, a happy ending.
With over 45 books published, The Malgudi Days, Waiting for the Mahatma, Grandmother’s Tales, The Man Eater of Malgudi, and The Vendor of Sweets are considered to be Narayan’s most popular works. His books are enjoyed by children and adults alike. Many of his books have been adapted into movies, the most famous being Guide (1958), which became a movie in 1965. Narayan won several award for his contribution to English literature. He was awarded the Padma Bhushan, Padma Vibhushan, Sahitya Akademi Award (for Guide), Filmfare Award for Best Story (also for Guide), and AC Benson Medal to name a few. He was nominated multiple times for the Nobel prize, but he never won.
His most popular novel, Malgudi Days, is based in an imaginary, semi-urban town called Malgudi, in south India.The town was created with a history dating back to the times of the Ramayana. Narayan, in an interview, once stated that he first created this town on the auspicious occasion of Vijayadashami. The first image he had of the town was that of a railway station. The name Malgudi came gradually to him. And what followed is there for us all to see. There were so many characters, each so different from the last one. R. K. Narayan never failed to amaze us.
As he himself says, "Novels may bore me, but never people."

(Article written by Tanuja Pattnaik. She is student of creative writing and working with us as intern)