The entire nation waited with bated breath. People gave up eating and sleeping. All hands joint in prayers, eyes closed, hearts fervently hoping for the recovery of their beloved one. It is not every day that the greatest star of Indian cinema has a life-threatening accident. The year was 1982. It was the month of July. Shooting for the film Coolie was in full swing. And then, the unthinkable happened. During the filming of a fight scene which required for the actor to fall on a table and then onto the ground, the corner of the table hit his abdomen. The result: a rupture in his spleen, causing a huge amount of blood loss.
Months of prayers, offers to donate organs, blood, and the very love for him seemed to work out in the end, when he finally recovered completely and could resume shooting for the film within the same year. The entire nation let out a collective sigh of relief. This is what he could do to the nation. This, ladies and gentlemen, was Amitabh Bachchan, the angry young man of Bollywood, the heartthrob of millions around the globe.
His accident affected people so much that, even the director of Coolie, Manmohan Desai, decided to change the ending of the movie. Originally, Amitabh Bachchan’s character was supposed to die at the end, but for a man who had come so close to death and escaped, that ending seemed like an irony. The ending was rewritten for Big B, as he is fondly addressed, to live. He did. And he still does. He lives in the hearts of all Indians as well as of all the people around the globe. He has established himself as one of the greatest actors of all times. But all this was not as easy as it sounds. 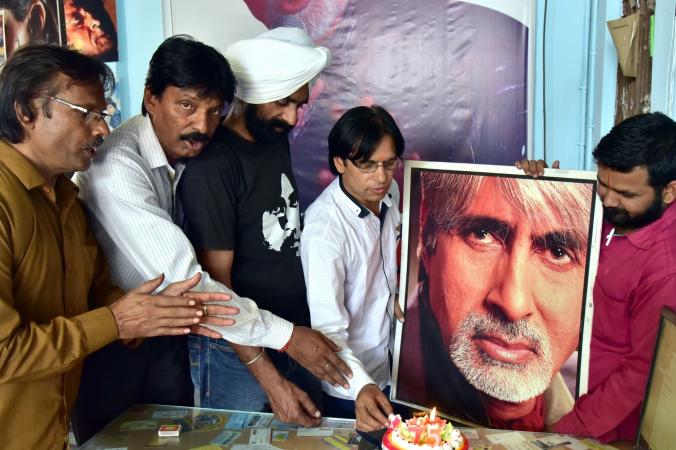 (Fans of Amitabh Bachchan celebrate his birthday in Bikaner)

After seeing tremendous success in over 25 blockbusters, his self confidence began to wane. His diagnosis of Myasthenia Gravis resulted in him losing his physical and mental strength. He gave up his acting career and wandered into politics. But that too did not hold much of his interest. After winning the Lok Sabha seat from Allahabad, he continued in politics for three years before finally quitting. Following this was the alleged Bofors scandal, from which his name was ultimately cleared after a long battle of 25 years. Within this period, he started his own company, Amitabh Bachchan Corporation Ltd. (ABCL). He faced great losses with the company, and this was when he hit an all time low. None of the films produced by ABCL did well. He was bankrupt. He was facing a legal battle against his creditors. His words show how deeply he was affected during this period. In an interview with India Today, he said, “I can never forget how creditors used to land at our door, be abusive, threatening and demanding, and worse still, when they came for ‘kudkee’ at Prateeksha, our residence.”.
How difficult must those years have been, we can only imagine. A superstar at a young age and then such huge failures can never be an easy thing to live with. But he did. With the help of his friend Amar Singh, he gradually got out of his financial crunch. His comeback as an actor was marked by the movie Shahenshah (1988). But this too was short-lived. With a series of flops over a period of five years, he eventually decided to retire from the film industry. But the audience had not seen the last of him. His rise in popularity began with Mohabbatein (2000). He began playing older, fatherly characters. And since then, there has been no looking back.
He has appeared in over 50 movies, played the host on popular TV show Kaun Banega Crorepati, and won over the audience yet again. He has won over 50 awards for his brilliant performances. His awards include the Padma Shri, Padma Bhushan, and Padma Vibhushan as well.
Truly, his entire life can be summed up in his own words:

(Article written by Tanuja Pattnaik. She is student of creative writing and working with us as intern)